Oh where have you been?? You may, possibly, or probably not been asking. Well I’ll tell you. 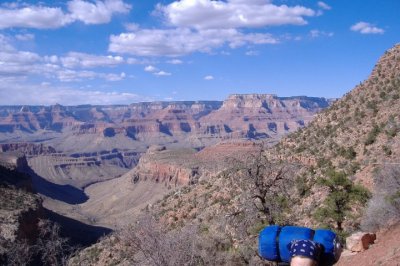 I went to the Grand Canyon. For the second time. With my family. Because we go backpacking every year and my Dad is a bit obsessed with the ol’ Hole in the Ground.

In the spirit of helpfulness, here are my reflections for anyone looking to embark on similar endeavor for the first time.*

In telling a new person about your upcoming backpacking trip, be prepared for their raised eyebrows. I was well into my college years by the time I figured out this was not something normal people did, at least outside of the Boy/Girl Scouts. Regular people go on vacation to lie on a beach, ride roller coasters, take awkward photos in semi-foreign cities or boring historical sites. But my father put the bug into us all very young with the wilderness vacations; 4 days every year in the Adirondacks at 8-10 years old, a week in the White Mountains in Junior High and the grand poobah trips to Yosemite, the Olympics and the Grand Canyon after high school graduation, when we were old enough to know that whining is embarrassing.

Whether you are raised to it, trying it for a lark or to prove our hippie credentials, be prepared for the following questions:

1. You’re not going to shower for 5 days? Like, not at all? (No, but there’s a river…)
2. Aren’t there wild animals out there? (Only ravens. Oh, and rattlesnakes. And maybe grizzly bears…)
3. So are there, like, bathrooms along the trail? (Umm…)

This last question should be handled with utmost delicacy if you are talking to your coworkers or someone you are trying to date. Some camp sites have outhouses. So you might want to tell your acquaintances about the privies and keep the real truth to yourself, so that they don’t carry with them the image of you digging a hole to squat over for the rest of the week.

Herein lies the least glamorous part of the wilderness adventure. The part they leave out of the epic novels you read as a child. Gandalf never, ever turns to the rest of the Fellowship to say “Boromir, can I have the trowel and toilet paper? I knew you were using it last. You guys keep on, I’ll catch up.” Another reason why you might not want to take the trip with people you are trying to impress.

On the flip side, one of the best things about being in nature is it does not matter if you fart, since so many things in nature already smell like fart. Additionally it is nice that you do not need to pay for anything since there are no stores in the wilderness. This is especially true if, like me, you are chronically unable to plan your own vacations and always wind up tagging along with your Dad. Then you may not have to pay for anything from the moment you get off the plane. (Yay for Dads!)

Dehydrated dinners are practical for keeping the weight of your pack downe. When shopping for your food provisions, please remember that while some dishes, like, say “Kathmandu Curry” or “Santa Fe Chicken and Rice” might sound appetizing on the labels, they are likely to rehydrate into “brown mush” or “orange mush (with lentils).” I suggest keeping it simple and staying away from geographically-specific dishes.

On the flip side, oatmeal never tasted so good as when you are ravenous and drinking iodinized river water.

Finally, be aware that without your phone, texting, emails, makeup, mirrors, headphones, tv, annoying strangers or anyone outside of your party to distract you, the truth of your smelly humanity and the real contents of your brain can get right up in your freaking face. And that can be difficult. But ultimately, between the silence and the vastness and the stink, I’m delighted to be there. Very weird.

But then again, nobody said we were normal people.

*Seasoned travelers, feel free to poke holes in my above statements all you want**. This schpiel specifically applies to short-term hiking jaunts in national parks; not sustained backpacking around, say, continents. I’ve actually never ventured to do that, because while I have no problem digging a hole to poo in in the middle of nowhere, I have a chronic fear of public showers, and other people in general.