It seemed odd, at first, to be “guest bartending” at a bar where I already work. But the MessHall bar houses an amazing array of spirits and fresh ingredients, and we love playing around with new recipes, even if it doesn’t all go on the menu. So last night I clocked in as “guest” and served some off-menu drinks. 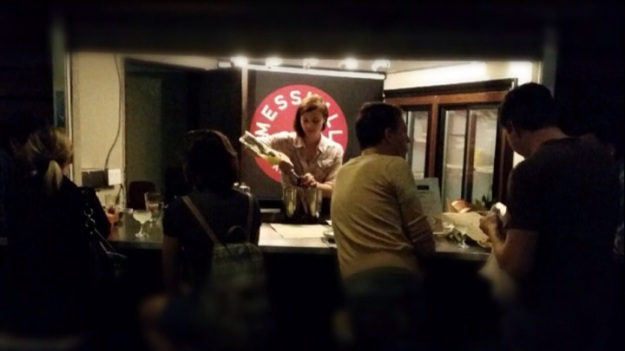 Every week, MessHall opens its patio bar to someone to try out some new recipes or showcase a spirit.

Having just published this here article on PUNCH about Skinos Mastiha Spirit, I decided to use some of the recipes I collected from Athens cocktail superstars Spyros Patsialos and Thanos Prunarus to further prosthelytize my love of liqeurs made from tree sap. Additionally, I had some drinks of my own I’d been cooking up for a while and wanted to test them out on some unassuming Wednesday night diners in Los Feliz.

Here was the menu:

The copy was hastily written. So sue me.

The first and last drinks are riffs on the Skinos recipes. I didn’t have all the ingredients handy for Spyros’s Mantequilla, so I substituted blood orange syrup for his passionfruit syrup,  and Branca Menta as a similarly minty-ish-herbal-oddball bittering agent comparable to the Underberg bitter. The result, after a little tweaking, was awesome.

The Ruby Jane (my own recipe) and the Mantequilla #2 (original recipe c/o Spyros Patsialos of huntingspirits.tv)

Prunarus’s Jalisko Flower was the other hit of the evening. Skinos and celery bitters are a natural match (carrots and celery!), and the tequila really brightens up the mix. Not having the time to do an infusion with the tequila, I snagged some of MessHall’s handy Kaffir Lime tincture and used it to rinse the glass and add a spritz to the nose. Just wonderful.

I think the winner of the stirred drinks was Colabórame (not pictured), a perfectly clear mix of pisco, dimmi, and salers apertif with a drop of mole bitters, which when combined somehow tastes of a really good espresso–a very subdued note in the ingredients by themselves, but somehow thrust to prominence when they are stirred over ice and sprayed with a little grapefruit oil.

Guest bartending is like moving, though, in that unless you’re a celebrity you really only get one or two goes at it before your friends stop feeling obligated to come support you. So maybe I’ll do this again, if they let me, but not for a while. It was a blast while it lasted, though.

How happy am I to be included in the Spring 2015 issue of The Stinging Fly?
So, so happy.

Check out my short story “The Load” by purchasing this fine publication. I own several and I’ve never regretted it.

So last June I sent in a 1,000 word story to the New Millennium Writings summer contest, and I guess they liked it well enough. Here is the story, Bolero, on their website.  It will also be appearing in the print issue of NMW coming out in January.

So I got that going for me. Which is nice.

Thanks to DPomerico and the good people at Suvudu (Del Rey Spectra SF/F) for the chance to contribute to the most awesome 2011 Cage Match.  Readable here.I have to admit: I’m kind of with some of the commentators there thinking that Takeshi Kovacs would probably take out Lord Snow in a fair fight.  But this is not a fair fight. Kovacs is weakened by his new sleeve and new surroundings and you know what? Sometimes life is hard. The envoy will download again.  I kind of wish Suvudu repeated Cage Match participants so I could show Mr. Kovacs in all his glory.

Still, Jon Snow’s a cool kid.  And Dance with Dragons is coming out soon.  So deal.

Print, baby! Haaaard copy. Go pick yourself up one today.
The Great Haul, New York Press.I’ll be over here, having my Mary Tyler Moore moment.